Seal pops up in Stourport 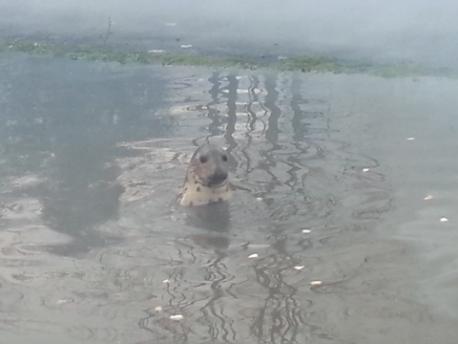 The seal had been spotted alongside Redstone wharf on New Years Day before travelling up to Bewdley.  On the way upstream this seemingly relaxed and happy seal was also spotted frolicking in the lock entrance to the basins.

On Wednesday morning Keith had found her way into the Stourport Marina where she surprised staff as they arrived for work.  Named Keith, after a civil war commander, when she was seen in and around Upton on Severn during November 2012.  Those at the marina named him(her?) bob as it kept bobbing up and down in the water to have a look around.  Often with a large Pike or other fish feeding happily form the well stocked larder that is the marina.  Mmm,  I expect some of the regular fisherman may be a bit miffed that the biggest of the fish may no longer be there.

We managed to get a short video clip of Keith enjoying it's surroundings and seemingly not bothered by any of the watching people.  Occasionally coming closer for a better look.  You can see the video on our facebook page.

Late on Wednesday, at about 10:30 - 11:00pm, a sighting placed her back outside the marina just above Limcomb Lock.  Plus another sighting in Worcester near the bridge at approx 11:30pm.  Oh hang on a minute, that's quite a distance.  Do grey seals cover that kind of distance, especially at night, is it heading back out to see now she's eaten all the big fish locally or, was it a group / pair that have made it this far up river?

It is thought that she was either lost or chasing salmon upstream that were seeking refuge from a choppy Bristol channel.  With the recent floods of course, passage around locks and over weirs would have been easy.

If you see her, let us know so we can update this story...