Sirius to the rescue... with a little help from their friends 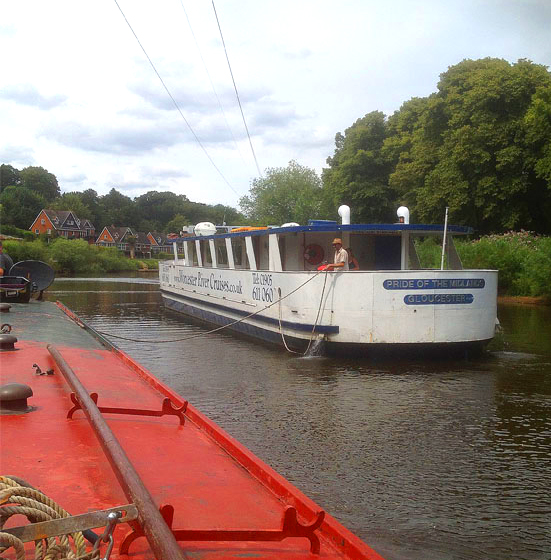 When you lose your engine, you lose your ability to manoeuvre or control your vessel and are left at the mercy of both, the river currents and wind direction. What do you do when you are, quite literally, stuck in the mud?

After a fire broke out in the engine bay of a narrowboat, its engine had to be shut down, rendering it stricken.

As soon as this occured, nature took over and the boat became stuck in the shallow waters along the river bank. Unfortunately, it was still too far from the bank to get off and get help.

They did the obvious, and called us to come and rescue them.  As is usual in boating, a fellow narrowboater stopped to offer assistance on his way to work.  As luck would have it, he captains The Earl, a trip boat based in Worcester too.  He knew what he was doing but his personal narrowboat just didn't have the power or wieght behind it to shift Pegasus out of the mud. The unlucky couple, Sue & Len Cale told us of this attempt and so our plan swung into action.

Off we went to try and locate the captain of the sister ship to the Earl, The Pride of The Midlands. Once approval from the Owner of Worcester River Cruisers gave his approval, engines were fired and ropes cast. The Pride is a decades old, 164 passenger packet steamer that weighs in at around 130ton. After a good few attempts to get a rope into the shallows, all it took was one good punch of the throttle and off she came.

Handing over to a smaller boat, in order to recover Pegasus to a safe mooring more easily, The Pride sauntered off downstream for her booking that same afternoon.  Both Sirius and the Cales would like to thank Worecester River Cruisers and both of their captains for help in this rescue.

The problem, it turned out, was two fold.  First, a leaky hose meant much of the cooling water was lost. Unbeknown to Len & Sue, having had a leak fixed just two weeks before, there was also a leaking diesel fitting.  Once the engine was no longer being cooled, the block overheated and the diesel then combusted once the flashpoint temperature had been reached.  It was only due to Len's swift actions in deploying his on board fire extinguishers that prevented a much bigger catastrophe.

The lesson in this case is to make regular checks of all hoses and pipework connections and, of course, keep up to date fire extinguishers at or very near the helm.